A Walk in the Park

Performance A Walk in the Park was part of the program A Common Ground at The Queens Museum and took place as a guided walk in Flushing Meadows-Corona Park.

In relation to the over arching project The Trans Atlantic Meeting on Nationalism(s), which A Common Ground was part of, I formulated and held the workshop Migrating Roots aiming to share practices and experiences of belonging and nationalism. It took place at the Finnish Institute in NYC.
Curators Susanne Ewerlöf & Carmen Ferreyra, Curatorial Program for Research.

A Walk in the Park in the Flushing Meadow-Corona Park as a text:

Exit the Queens Museum of Art and enter into the park, the Flushing Meadow-Corona Park. Leaving the architecture behind, the straight vertical surfaces get replaced by shifting green. And brown obstacles and enclosing bodies of growth. What is the façade of a park, a green space? If it shows a specific era, it does so to initiated persons with garden knowledge. Perhaps it presents local crops and native plants, maybe in mix with migrating trees and flowers. Brought across the planet because their beauty, their willingness to grow, or other reasons. An architectural façade shows power, it shows a level of maintenance and perhaps neglect of attention. The façade is an impression, a presentation, an aesthetic identity of that single place. The façade of the park is more on the ground, in the layout of green surfaces and pathways.

The layout of the Flushing Meadow-Corona Park rests on several histories. It was the location for two New York’s World Fairs, one in 1939-40 and the next in 1964-65. Both echo in the naming of the streets crossing through the park: close up to the Queens Museum is the Avenue of the States. Enclosing the Unisphere monument is the United Nations Avenues North and South, and radiating out from the Unisphere runs the Avenue of the Americas (towards north) and the Avenue of Africa. All spread as a map of the world collected in a green space. This way of naming speaks of times when the world was still considered to be ONE, an entity with one truth, one (best) way of thinking and reasoning. A park, as well as a city, is as much a process as the bricks and seemingly solid surfaces it is made of. The Maloof Skate Park a bit to the south from here is under reconstruction, and there the sign speaks three languages: English, Russian and Chinese. This tells about who the guests, or users, of this park is today. Not one, but several cultures gather here. A being the activity carried out there, the sports, the slow walks, the barbecues, the blankets for resting several hours.

Let us move closer to the Unisphere. It was constructed by landscape architect Gilmore D. Clarke who was the landscape architect for a handful parks in NYC. It was raised for the World Fair in 1964. The competition amongst a handful artists for a monument failed, none of the artistic answers were the wanted one, so Gilmore D. Clarke was asked to solve the situation. What is even more pragmatic about this monument is that it was built for free by US Steel Corporation, in exchange for having their name on the plackets permanently. The Unisphere is a see-through globe in steel and tree metallic lines encircle it representing the three first satellites. This was the dawn of the space battles; to be first, reach furthest away etc. Echoing with renewed strength in our times, now with rouge states sending shuttles to the moon and corporations joining. Here by the Unisphere we can all get a splash of the joy of this technical advances, as a cooling water fume spreads by the winds.

Lets walk on. Look at these trees, they have been here for a long time. I especially like the pine tree over there. Trees move towards empty spaces up in the air, where they can spread their leaves or pine needles and meet the sun rays. They only wanders from one generations seed as far as that can get carried by a bird, the wind or an adventurer. Think of a tree you know well, growing somewhere else than here. Take your time an close your eyes and remember that tree. The colours, the micro climate around or beneath it.
…

Now we approach the Freedom of Human Spirit, sculpted by Marshall Fredericks 1964. He was an artist from the United States that travelled to Europe for more artistic education, as was the code of his time. One figure of influence for his artistic development was the Swedish artist Carl Milles, who also made these kind of flying, detached fairy-like human creatures. Carl Milles who were accused of being a nazi in the beginning of WW2, and that also reminds of a time where there still was ONE truth, constructed by the power nations of Europe and perhaps even by the US. After WW2 the US definitely was on top of the world. The name of the sculpture: the Freedom of Human Spirit, talks about ideals of Freedom and here I like to quote what Marshall Fredericks himself said about the sculpture:
“I realized that great multitudes of people, of all ages, and from all walks of life would see this sculpture…I tried to design the work so that it was as free of the earth, as free in space as possible…the thought that we can free ourselves from earth, from the material forces which try to restrain and hamper us, is a happy, encouraging and inspiring one, and I sincerely hope that my work will convey this message.”

The detachment to a place that both the figures in the sculpture show is quite different from present concerns about first nations and about the more problematic ramifications the notion of one land, one people with one language and a shared history, formed into nation states, has. I rather get connected and look for peers where interests that can be shared, no matter origin. In our times the sense of being rooted is higher valued than to be free to fly away. Now I get myself messed up in speaking about this in general. A singular narrative forms a place, a location. I get formed by the persons I meet.

The nation state as a form for creating ownership of land. And rules for the ones living there. Normative truth as mechanisms for how we learn reasoning. And the very hard task to collectively imagine some other structures. Together.

Talking about the park as a process, I want us to visit a more recent grove just over here. It is the American-Israeli Friendship Grove, that was completed as late as in 1995. It is created as a tribute to the forming of the nation of Israel in 1948. Israel as a young state, a one-sided formation by the Jewish Agency, after suggestions by the UN 1947. Forming a state on land that was inhabited also by other cultures, with other hopes and wishes for their rule. Israel, as an idea and as reality, was rejected The Arab leaders. History knows about the 6-days war in 1967, and about that the territory still holds several claimers to be the rightful power. Or co-powers. In this part of the park is planted native trees from America and from Israel, a green meeting. Here is also a tree from Lebanon included in the grove, as Lebanon stayed neutral in the war of 1967. Coming from Sweden I can relate to the tricky balance of being a so called neutral nation (even if my father is Norwegian and his family was clearly involved in WW2). In Israel they dig certain layers in their archaeological strive to prove the Jewish right of the lands to be the strongest. Physically. It is a struggle using a mid 18th century idea on previous history, using history for contemporary purposes in a very out spoken manner.

Text written August 2019 in Stockholm.
This script is a construction concluded a month after the actual performance walk A Walk in the Park took place in the Flushing Meadow-Corona Park. It is made from my intensions, my notes and research for the improvised walk. A walk that did not start at the entrance to the park from the Queens Museum, but was conducted in reverse, as we had to leave at the main entrance to a sunny parking lot and a trafficked highway. So, it functions as a script of a lot that was mentioned, some forgotten, and some material that I wished for, or intended to, include. 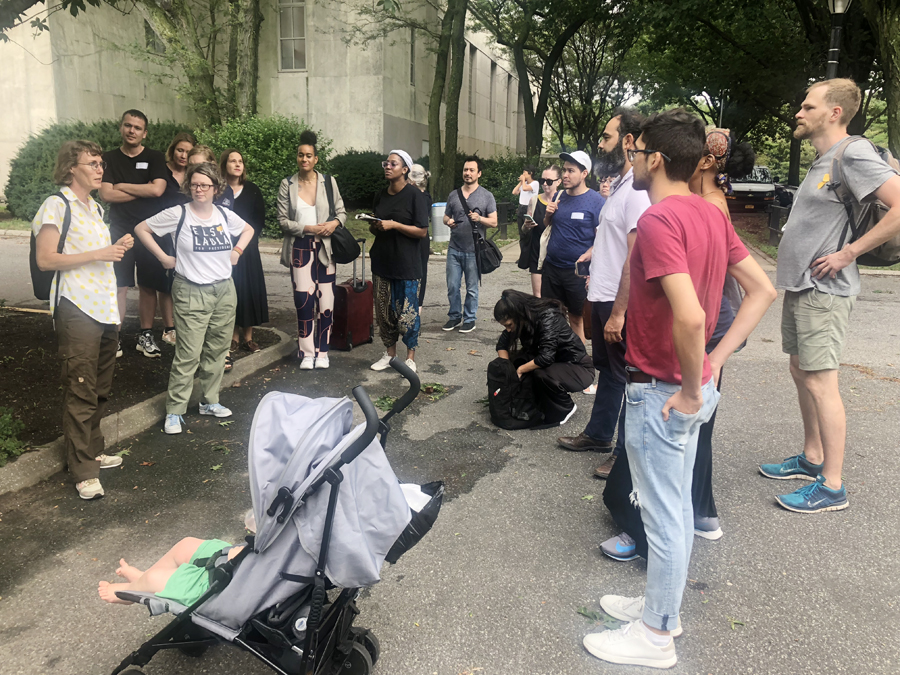 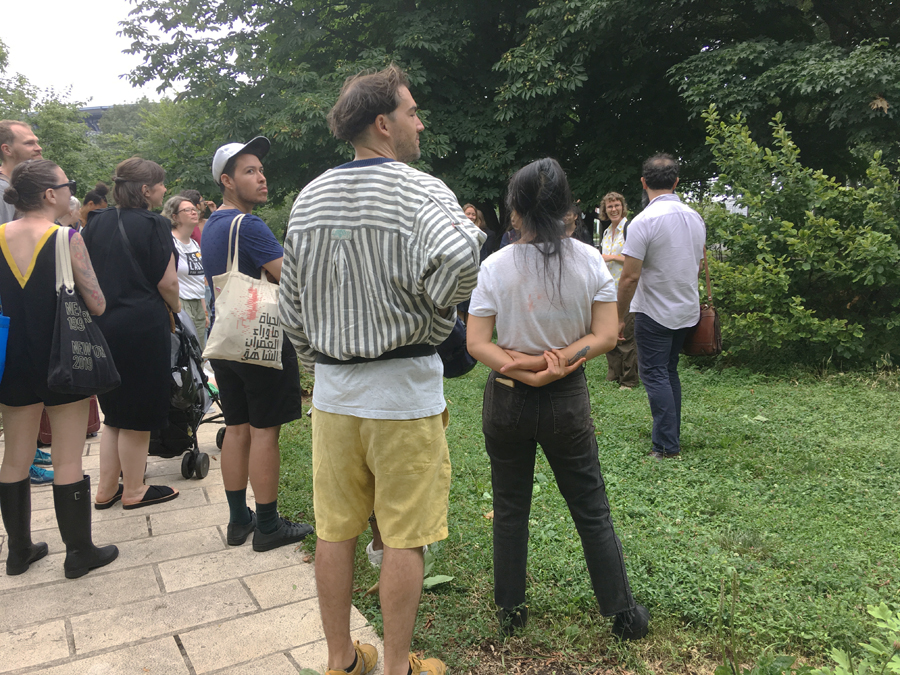