A one day sculpture at a pavilion in Tantolunden in Stockholm.

B was a one day sculpture made out of unprinted newspaper paper, tape and some threads. It had the tree dimensional shape of the letter B. B can mark a place that is secondary or even an event that is not carried out well. B is the first letter in the Swedish word berg for mountain –it has the massiveness of a mountain. B also resembles the shape of mount Ararat, the symbol for the Armenian nation. Armenians living outside of Armenia often builds a small sized model of mount Ararat since they like to be surrounded by mountains.

B was attached to strings and elevated to fill the pavilion, the wind was helping the structure to lift. At one point me and Anna spoke the words beginning with the letter B that came to our minds.

Over a period of two weeks Anna Koch, artistic leader of WELD invited Christoffer Paues, Angela Duran, Susanne Höglin, Ida Lundén, Gustaf Broms, Rutger Sjögrim, Markus Wagner, Liv Strand, Auditiongruppen and herself to occupy, discover or change the place that is made of the pavilion in Tantolunden. The events were filmed and was summarized as a film. 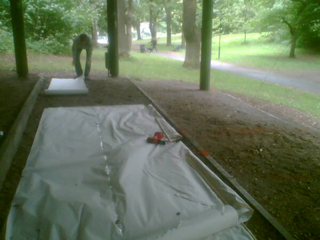 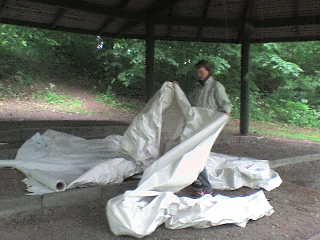