LARM documents and put forward women active in sound art in the Nordic countries. Through the LARM project we are making a contribution to the historical record of sound art. LARM has focused on the activities of women in sound art because we could find no coherent information or documentation about it in books about the subject. This together with what we could see of the scene of active women in contemporary sound art, gave rise to the project.

LARM arranged a festival and an exhibition of sound-art in Stockholm’s Kulturhuset March - April, 2007. At the festival the book LARM From mouth cavity to laptop: the sound of Nordic art, a double CD and the Internet archive on LARM’s web site were launched. Documentation and more information is found under the link “the Project” in the main menu.

The LARM project was sparked off in August 2004 by the artist Mari Kretz together with Mona Petersson and Liv Strand. In July 2005 LARM’s working group reorganised and now consists of artists Maria Bjurestam, Maria Hägglund, Mona Petersson and Liv Strand. In the autumn 2005 the project acquired the financing required for implementation and the process gained additional speed.

The book, LARM Från munhåla till laptop: ljud i nordisk konst/ LARM From mouth cavity to laptop: the sound of Nordic art, presents a selection from the rich material of the LARM inquiry, exhibiting sound art from different perspectives in thematic texts and presentations of artists. The texts in the book are in the Nordic languages with English translations. It is published in collaboration with Kabusa Förlag. Distribution is from 2014 handled by us, the old LARM-team, send a mail to liv[at]larm-festival[dot]se.

Accompanying the book are two CD:s with 24 tracks spanning 60 years of new and previously not published material along with well known tracks; from composer Else Marie Pade’s Syv Cirkler, Denmark 1958, to Kristínu Björk Kristiánsdottir’s, KiraKira’s, drakúla darling, Iceland 2006. LARM from mouht cavity to laptop is released on Kning Disk.

The LARM manifestation is supported by the Stiftelsen Framtidens Kultur (Foundation for culture of the future) and the Nordic Culture Fund. 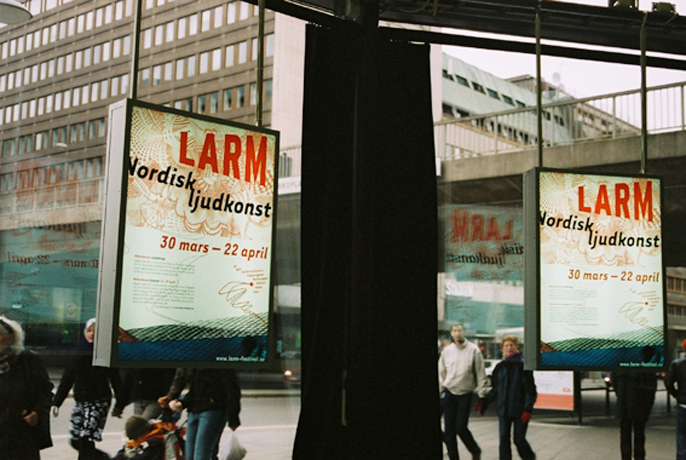 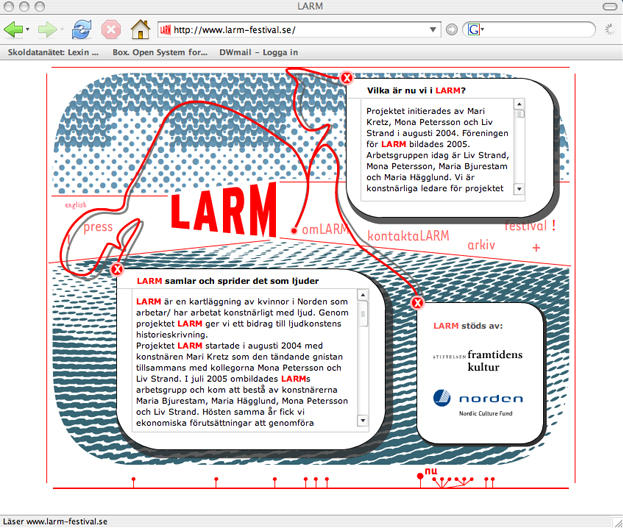 Opening of exhibition with a live radio piece by Maia Urstad.

Emi Maeda on stage in the festival.