Exhibition together with Asako Shiroki at Japanisch-Deutsches Zentrum Berlin

The exhibition Contiguous notes handles languages of abstraction, as a parallel to techniques for handling material. In Contiguous notes the sculptural works of Asako Shiroki will meet with the typographic interest of Liv Strand. One series of graphic prints takes a close-up view on the spaces within letters themselves, diving into text. The near-sighted view suggests for letters to have a surface scored and marked, and for them to imprint the paper they take position on with their substance, as weight. Another series consists of singularly printed typographical text-posters, completed to make the paper direct itself towards all ends, as one sculpture would. Liv Strand has written the texts for the posters to operate along similar lines as how sculptures convey their message. Some three dimensional objects will be on display together with the posters.

Both artists take a close interest in how the sensitivity of the work activate the senses of the viewer.

The assemblage of materials in Asako Shiroki's installations include strings and glass to complete their sensations. The way the materials are combined make the parts seemingly interchangeable, as they propose to make up their own alphabet with ever-changing possibilities. Asako Shiroki's art works often makes a seemingly temporary compound where the components fit into a perfect incision. If one end is set loose all the other sections threaten to break free.

Contiguous notes: by repetition, by utterances, by the silence and where each note of the composition of a work is placed. 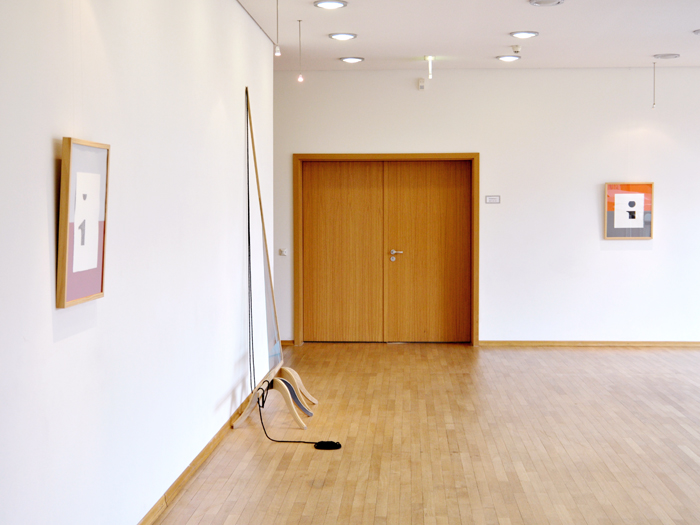 From close to far: 'Mirroring notes', 'A cabinet unable to hold any secrets' and 'In the grid', sculptures by Asako Shiroki

View of 'Objects, based on numbers', five objects

One of 'Objects, based on numbers'

Another one of 'Objects, based on numbers'

View of 'Objects, based on numbers', five objects

'Word Posters (sculptural aspects)', six different typographical prints made in relation to 'Objects, based on numbers'

All series of 'Word Posters (sculptural aspects)', typographical prints made in relation to 'Objects, based on numbers'

Outside view of Japanisch-Deutsches Zentrum Berlin