Through Composition as Explanation

A collaboration with Marcus Doverud

The project Through Composition as Explanation departed from reading the text 'Composition as Explanation' by Gertrude Stein first published in 1926 and since then the work has had several outcomes as performances, workshops and seminars. Throughout the process we have been paying close attention to how knowledge and experience can be accumulated and shared in a group, and further more how this shared understanding can be translated to different media.

The reading practice departs from Stein's text, combining the reading aloud of that particular text together with other texts and films to better understand, update and discuss some issues that Stein's text bring about e.g. What is the contemporary?, the interfold of time; past, present and future, the problem of the whole and the part and the whole (unity) of a thing that is itself a part of something etc.

The staged art performance Through Composition as Explanation is a visual and spatial presentation featuring some of the concepts thoroughly discussed in the mentioned reading practice. The knowledge and understanding accumulated was (in)forming a combination of objects, the space in question, human bodies and duration that both comprise, and simultaneously, became subject to composition. The Moderna Museet in Stockholm were a suitable institution for the initial presentation (in Nov. 2011) because of how they own and take care of many classical art pieces. That served greatly as an analogy, bringing an artwork by Picasso on stage, to the ways meaning and value are negotiated over time, discussed in some of its complexity in Stein's text.

The staged work twice twice filter some of our further discussions and practical attempts. The language of the performance was spoken words or other means as improvised sound/music, choreographed bodily encounter and babble as voices without a specific language, trying to describe and articulate absent objects etc. Running through twice twice is a tone of how the piece operates by insisting on the making in situ, attempting a strictly composed auto poetic production. We worked with what we call 'concept-objects', an exercise in verbally exhausting ones knowledge on a topic or a word by telling it. twice twice is a 1,5 hour long composition that was premiered at Weld in Stockholm, May 2012.

Part of the production leading up to the public events was made in collaboration with curator Catrin Lundqvist at Moderna Museet and artistic leader Anna Koch at Weld.

The work Through Composition as Explanation is initiated by Liv Strand and is conducted in collaboration with Marcus Doverud (performer, musician with a degree in aesthetics), Ana-Maria Hadji-Culea (curator, writer), and Amelie Rydqvist (architect, artist). The work is supported by KU fundings from Kungl. Konsthögskolan in Stockholm, and by project support from the City of Stockholm, and Kulturbryggan. 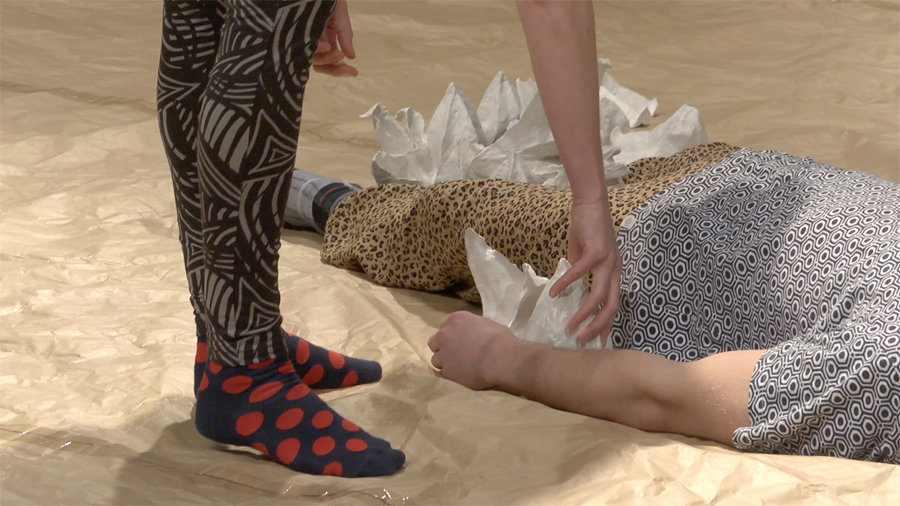