The art walk Tur_tur was made as a tour for a smaller group to join. The word 'Tur' is Norwegian for walk; a rather lengthy walk preferably in nature. Tur_tur was developed for 'How Green Was My Valley', aiPotu's out door part of the Vevringutstillinga, as a work where I and the participants tried to become "local" together. One aspect of  Tur_tur was to try out as much as possible, in the sense of aiming as little information or back ground, that was needed for people to be able to feel comfortable accompanying the work. A few moments were very close to something very very (too) loose, and embarrassing. I enjoyed that enormously.

Parts:
People were asked to come along for a sensorial walk and then we started warming up and jumping activating the bodies. A series of event followed: touching the bark of a birch while eating a buckwheat pop, dryness. Walking in somebody else's style, same length of steps accordingly bending the knees elevating the foot a specific distance from the ground. Standing directing ones body and gaze one way, letting ears wide listen to a text read, projected from behind. Entering a small cottage for a turbine, a tiny waterfall steaming beneath, let your hand squeeze a pine cone and eat soft drink pops popping soundingly internally in your skull.

The text:
read was a page of Peter Weiss' book Exile. This page tell about how his nanny Auguste discover the world along with him: not knowing more than him about how things function. They speculate together, they drift equally through the city and thoughts. Thinking, location and language on the move. I stop reading aloud as he states 'that at that exact moment (…) an urge for an independent achievement was established'. 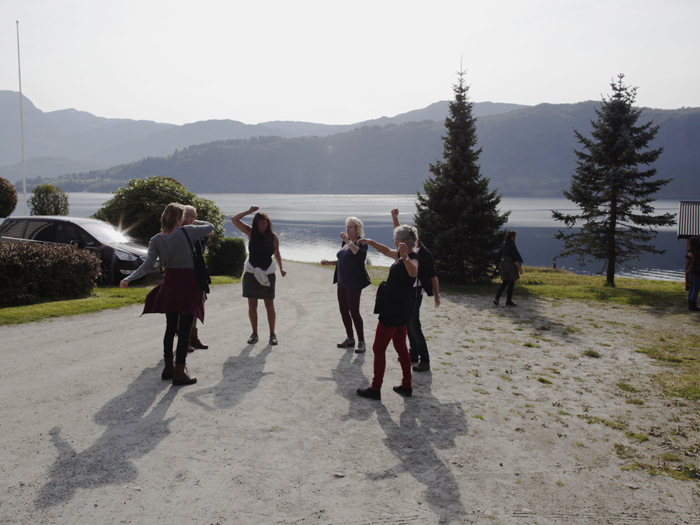 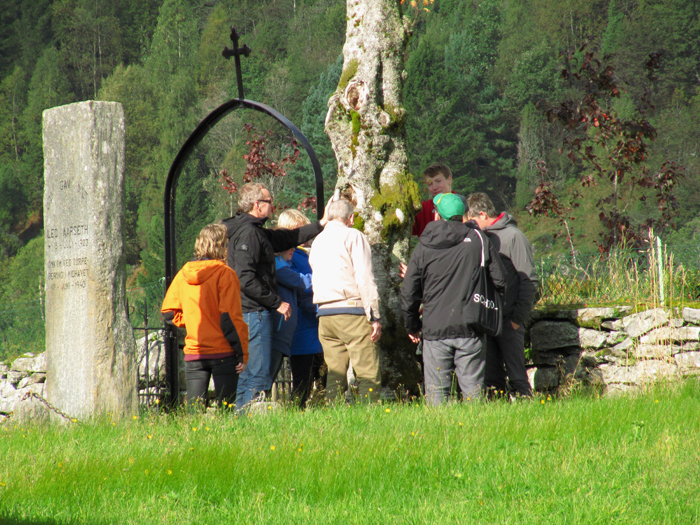 Warming up. Photo by Anders Kjellesvik.

Gathering around a birch. Photo by Laura Solari.

Facing the disputed mountain, threatened by mining and being dumped into the fjord –while listening to a text read aloud. Walking. Photo Liv Strand.

Narration of the coming sensation... Photo by Anders Kjellesvik.

The waterfall exiting underneath the cottage with the water turbine. Photo Liv Strand.