Salon Material is a series of salons that links theory and text to material and physical space.

Salon Material is an initiative by artists Johanna Gustafsson Fürst and Liv Strand, and comes out of the desire to create another type of dialogue by re-building the bridges and throw more mental ropes across the gap between word - spoken or written - AND space, things, material and bodies.

The format for Salon Material is a long evening of discussions and other actions. Theoretical texts can be read in advance, or we rather collect knowledge out of presentations on a given subject, delivered by all participants that have signed up. Accumulation of information and associations leads into discussions and exercises that demand some kind of negotiated materialization. Depending on how many that join a salon, we work both all together and in smaller groups. Out of the exercises very different things can emerge.

More about Salon Material can be found at our blog! And if you like to sign up for the invitations, please send a mail to liv[at]livstrand[dot]com.

-------Earlier at Salon Material (2011-2013)
The first four salons operated in combining a text with a work or a body of the work of. We passed through philosopher Spinoza, artist Sturtevant, philosopher and sociologist Henri Lefebvre, artist Ursula Biemann. Departing from this the social space was materialized. This was followed by a salon with a co-creation of topic that led us to writer Lucy Lippard, supplemented by a text Solfrid Söderlind by Lisa Torell, and photos from the Polytechnical University, a legal area of asylum in Athens. Then reading Bruno Latour and an interview with artist Falke Pisano the participants was asked to bring Latourian or / and Pisanian images for a joint slide show that the conversation built out of. We took on the four elements as material: AIR in varied perspectives: in the social space, as absenteeism and air provided for respiration and a photo-tour from Turin looking for air in art and the city. FIRE showed ways to care about space, of heat and cold. WATER culminated in Flow Manifests who ridiculed the concept of flow as a theoretical flow as well as the neoliberal market phenomenon. One session took place in the Riksarkivet (The National Archive) where we perceived archive as information gathered and as traces and search paths. EARTH organic as soil between the toes and in the rubbish heap of the TV show Fraggle Rocks as ultimate oracle. Experts as subject concurrent with digging, an act that strengthened or disturbed the concentration of participants. Simultaneity as topic. A duo-topic combined materials as communication, other than language, with language as material. First part triggered by sound-precision, dance and speech and hands in clay and a body connected to objects and textures, second part held in Berlin created a focus on the material of social relations. Later in the spring we walked an evening, spreading as virus, in mind and body, in the Treptower Park in Berlin 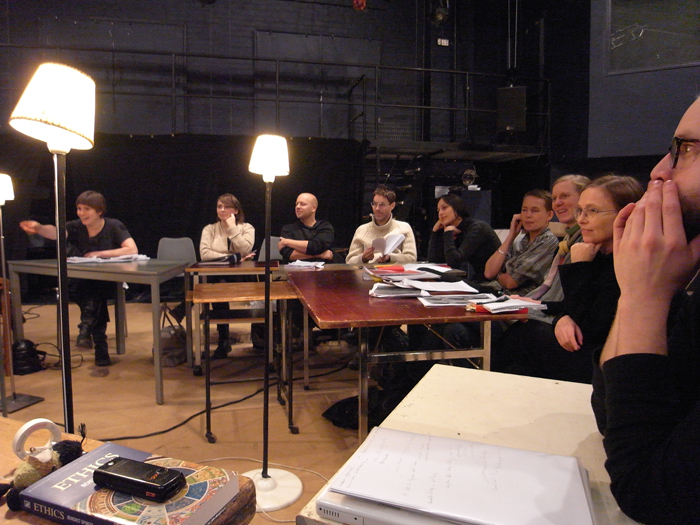 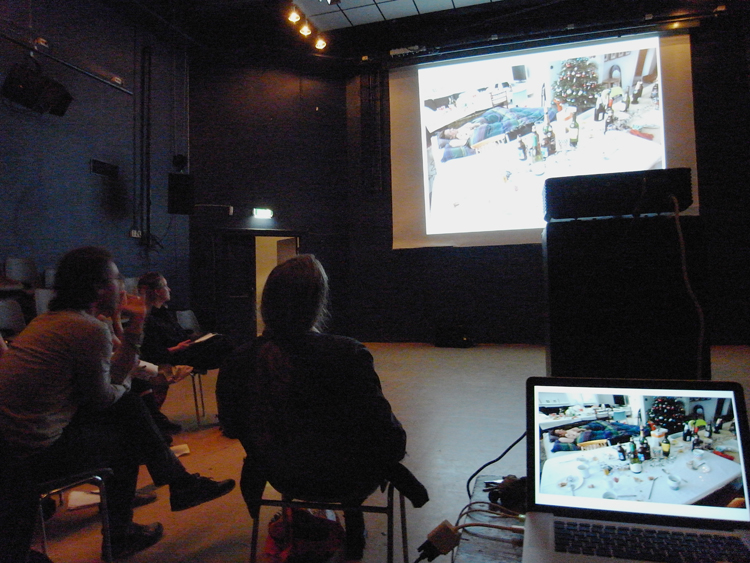 On Spinoza and Sturtevant

A stream of images collected to discuss a text by Bruno Latour and a video work by Ursula Biemann with.

Air, showed by the social connections mapped around a table.

Writing a manifesto guided by 'flow', here dissolved in a bowl of water.

The expert and digging.

A hole in the ground.